US Dollar Scales Back in July

The US Dollar suffered its largest losses in over a decade during the month of July. While this may serve as a boon to domestic economic growth and corporate earnings, it may also serve in increasing the odds of inflation.

The US Dollar Index fell almost 5% in the month of July, its third straight monthly decline. The index, which compares the US Dollar to a basket of major currencies worldwide, slid to 92.85, the lowest level it has seen since May 2018. All major currencies rose against the dollar last month, with the Euro appreciating to its highest levels against the dollar since 2014.1 This past month’s fall was magnified in the past two weeks with the release of the worst GDP number in history alongside suppressed consumer confidence numbers and rising unemployment claims. Interest rates at or near zero and trillions of dollars in monetary and fiscal stimulus have also been contributing factors to the dollar’s pullback. A ton of money is flooding the system and yields on fixed income investments are the lowest on record. Such a scenario can lead to a weakening in the dollar’s purchasing power and is one of the reasons why the Fed is keeping a sharp eye on any potential rises in inflation, a situation where there is too much money chasing after too few goods. As inflation can erode the value of the dollar, it is often during such inflationary economic cycles where we see the Fed tighten money supply and raise rates to curtail inflation by strengthening the value of the dollar. While this is the exact opposite of where we are right now, it is a situation that can often arise as a potential consequence of how the economy is currently operating.

It is important to understand that the Fed will look to employ monetary policy that is accommodative to the economic environment. Just as the Fed may tighten monetary policy to relieve inflationary pressures, the Fed will also look to increase money supply and weaken the dollar when the economy struggles. This is, in part, what is happening now. With the economy just recently starting to emerge from a complete shutdown, the Fed has increased money supply to individuals and corporations in an attempt to bolster the economy. Without having taken such  measures, it’s very likely the economic situation would have been much worse as there would not have been enough money for individuals and businesses to stay afloat. In any event, currencies and the monetary policies around them need to evolve alongside current and future economic cycles while always helping to influence positive outcomes. 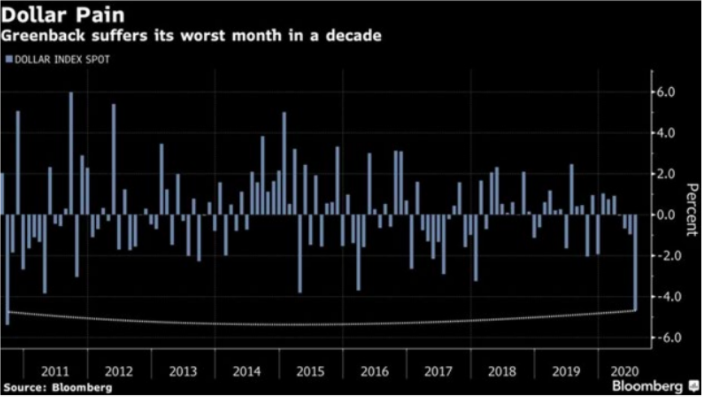 Accordingly, a weak(er) dollar will have both positive and negative consequences. While a weaker dollar will make foreign imports more expensive, it also means that exports are much more affordable to foreign consumers. During times of economic duress, a weaker dollar can be a huge help to American companies in being able to produce and distribute their products. China has manipulated its currency for decades, keeping it at artificially low values so that its goods are less expensive to foreign buyers. Though the US has always been a net importer of goods, a weaker dollar allows US companies to be more competitive so as to increase revenues and employ more workers, thus helping to stimulate the economy.

While the relative strength of the US Dollar has the ability to influence a variety of economic conditions, its correlation to the stock market is weakly to moderately correlated at best and very often quite unpredictable. Over the past 50 years, the correlation between the US Dollar Index and the S&P 500 is -.2. Over the past 20 years, the correlation is -.35.2 Overall, a fairly weak inverse correlation over the past 5 decades. Moreover, in the past 50 years where the stock market has been positive 40 times, the dollar has been up 22 of those years.3 Of the 10 negative years for S&P 500 returns in that time period, the US Dollar has been negative 5 of them.4 Again, more of a coin toss than a strong correlation. However, despite the uncertain correlation between to dollar and the markets, there are times where we have seen the negative correlation intensify significantly. The tech bubble crashing at the turn of the century was indicative of such a time period as the markets plummeted and the dollar soared. The same happened in the Great Recession of 2008-09. We also saw extended periods of dollar weakness in 2017 and 2018 when global economic growth began to fire on all cylinders. Most recently, we saw the US Dollar appreciate rapidly and significantly in the middle of March when COVID 19 shutdowns began wreaking havoc on global economies and markets. Simultaneous to the markets cratering, the US Dollar Index rose from 94.89 on March 9th to 102.82 on March 20th. 5 In fact, the index remained elevated above 100 throughout most of the month of April before beginning to recede in May. As we can see, despite the dollar and the markets not being so strongly correlated over the long-term, there are numerous shorter-term time periods where their correlation is very strongly correlated. These time periods tend to be time periods of immense global uncertainty, where international trade is slowing and dollar liquidity is tightening. Markets are selling off, fear and volatility are rising and money is flooding into the ultimate safe-haven asset--the US Dollar. This is what is known as the “risk-on, risk-off” trade. When risk is “on”, more aggressive risk assets such as equities tend to rise, but when risk is “off”, more defensive assets such as the US Dollar (and Treasuries) tend to rise. Indeed, investors are sitting on the highest amount of cash reserves of all time. From this perspective, the recent pullback in the dollar may serve to suggest a normalization in levels of the greenback now that the global economies have begun to move forward from the coronavirus induced restrictions and shutdowns that stifled their economies.

As fear and uncertainty are easing from their pandemic highs, money is once again being allocated globally as opposed to solely in the United States. This may be one of the reasons that global equities have outperformed US equities since May of this year. The US Dollar is the world’s global reserve currency. There is not an area of the global economy that is not influenced to some extent by the relative strength of the greenback. As influential as the US Dollar can be, it can be used as an extremely effective piece of monetary and fiscal policy to help the nation (and the world) during different economic cycles. While the dollar has pulled back sharply in the past month, the effects of a weakening dollar will likely be varied. Continued weakening may have a positive effect on economic growth and corporate earnings, while increasing the chances for future inflationary pressures. With respect to global equity markets, a weakening dollar should not necessarily be looked at as a negative for stocks. As the dollar soared while global markets sold off in March and April, a currently weakening dollar may serve as confirmation that investors feel the worst of the crisis is in the past, beginning to shift assets away from the most defensive of investments.