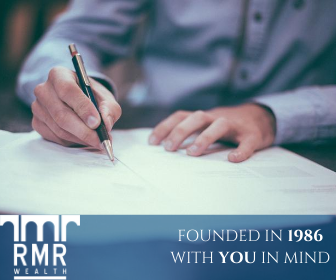 The market volatility index (VIX) saw its sharpest spike in a month last week alongside a significant drop in consumer sentiment.

While the S&P 500 Index has risen over 40% from its March lows, the CBOE Volatility Index remains elevated at a level nearly twice the amount of its pre-pandemic, February bottom. The market’s fear gauge has been stubbornly stuck above 26, which is far removed from its 80+ peak in March, but well above its lowest reading of 12 in the beginning of the year.1 The VIX is 41% above its historical average and implying daily fluctuations of 1.7% in the equity markets.2 Indeed, 22 of the past 100 trading sessions have registered fluctuations exceeding 1.5%, showing a persistent prevalence of volatility in equities as investors remain skiddish and uncertain on the direction of the markets.3 Although a high VIX reading in and of itself is not necessarily bearish for stocks, it is indicative of investors expecting a high degree of uncertainty reflective of the market making big moves in either direction. Whereas much of the panic and hysteria accompanying the markets cratering in March has abated, the heightened volatility in U.S. equities as evidenced by an elevated VIX is the clearest signal of the lingering fear and insecurity among investors. 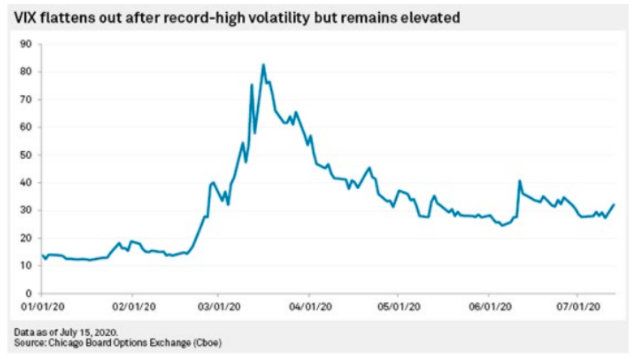 Such lingering fear and uncertainty in the markets has also been reflected in repressed levels of consumer sentiment as the University of Michigan Consumer
Sentiment Survey dropped over 7% for the first two weeks of June, remaining at historically low levels since plunging in March.4 Americans have become
increasingly concerned with overall economic conditions, and have expressed a collectively bearish tone on future expectations. July’s sentiment levels are barely above the lowest levels of late March and early April. It’s becoming more and more difficult for many Americans to see a light at the end of the tunnel amidst a recent widespread resurgence of coronavirus infections nationally with many states being forced to roll back plans to move forward and enforce continued mandatory shutdowns. Additionally, Americans are concerned with the implications of a national election, whether or not there will be additional fiscal stimulus and how well companies can do in getting people back to work and returning to some sense of normalcy both personally and professionally. 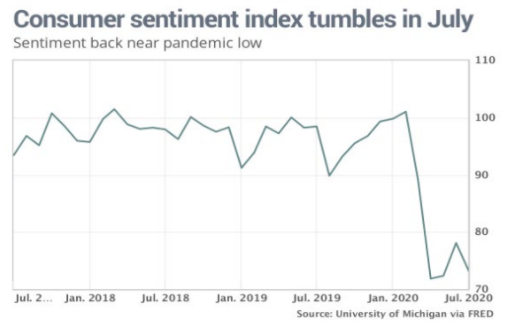 Expect that fear and volatility remain prominent and elevated for as long as consumer sentiment remains repressed. Expect consumer sentiment to remain repressed for as long as there in uncertainty regarding how the country will fare in effectively moving forward from the pandemic induced crisis. Expect uncertainty in how effectively the country will move forward from the pandemic induced crisis until infections begin to dissipate and restrictions and shutdown provisions begin to disappear. The general backdrop has not changed-it’s still all about the virus.