Finally, when things were beginning to look more favorable for the beaten-down stock market in 2022, Fed Chairman Powell pulled the rug out from underneath the recent stock rally, becoming the Grinch who stole Christmas.

On December 9th, the PPI (Producer Price Index) report showed that inflation was slowing down, but not as fast as the market would have liked, and the S&P 500 dropped 3.37%, and the NASDAQ, 3.99% for the week, as reported by Barron’s. The worst week since the significant September declines.

On December 13th, the November CPI report showed that inflation slowed, increasing just 0.1% versus the 0.3% anticipated. The fifth month in a row of slowing inflation, with the last two months showing significant slowing, as reported by CNBC. The stock market pounced on the good news, rallying sharply for the day and carrying over the next morning, opening up 500 points on the 14th.

The following chart points out what sectors of the economy inflation has impacted the most and where total inflation has run for 2023. 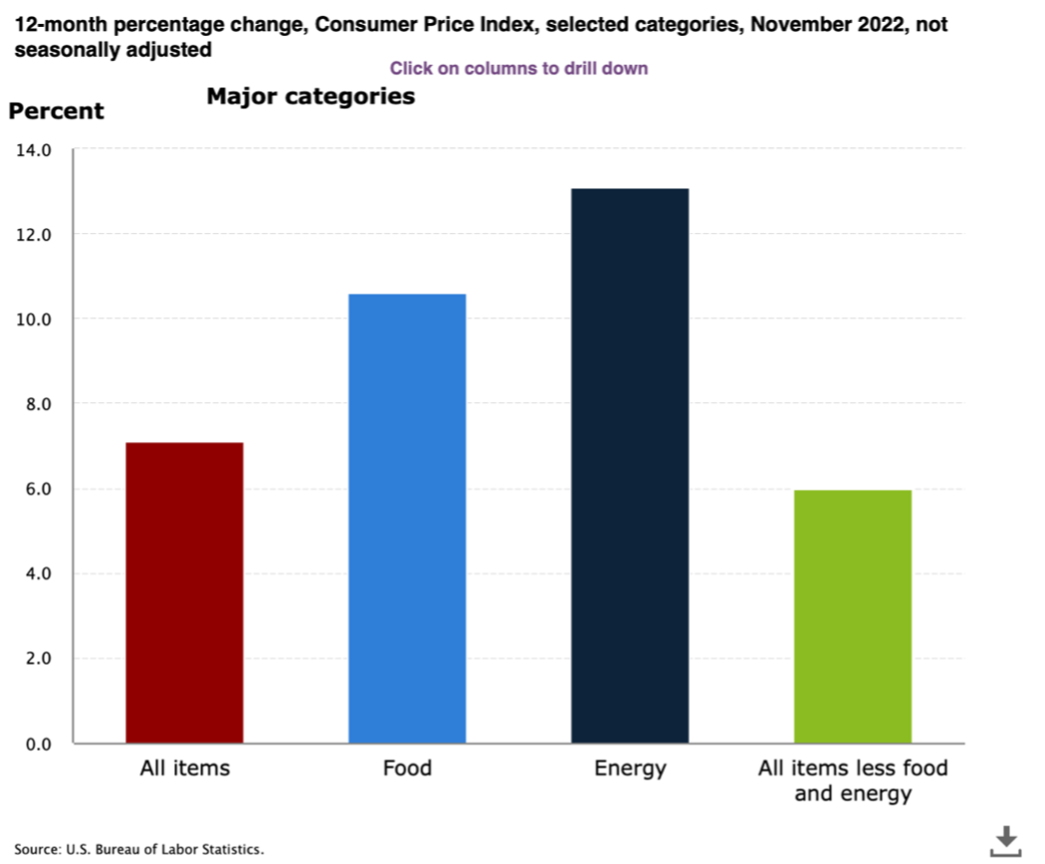 That afternoon of the 14th, the Federal Reserve, as expected, raised the discount rate by 50 basis points, moving the fed funds rate to a target range of 4.25% to 4.5%. After four previous increases of 75 basis-points, it is a sign that the worst of inflation is behind us.

Unfortunately, as he has done throughout the year, Fed Chairman Powell tossed in a “monkey wrench” during his prepared remarks after the rating announcement.   Powell stated, “more rate increases can be expected in 2023 until inflation is moving toward 2% sustainably.” His tone was not what the market anticipated. The market was hoping he would say the Fed would pause raising rates next year until the Fed had a better understanding of how the economy was reacting to the numerous past increases in 2022. The stock market immediately responded to his comments by wiping out the gains from the morning, and by the end of the day, the DOW had dropped 150 points. Thursday the 15th continued to see continued selling, with the DOW retreating over 700 points.

On November 30th, Powell said, “It is likely that restoring price stability will require holding policy at a restrictive level for some time.” The market, in our opinion, should not have been so surprised by his recent comment. So much for wishful thinking that the end of rate increases is near.

Of course, the Fed may raise rates slower than Powell suggested. Remember, the Fed in 2021 made a severe error in predicting inflation was just “transitory” throughout most of the year.

The Fed will have to raise rates above the 5% range to get inflation back to the Fed target level. A mild recession in 2023 will probably be needed to lower prices enough to break the back of inflationary pressures. Unfortunately, job losses will become necessary to slow down inflationary wage growth.

The bond market is still experiencing an inverted yield curve, with short-term bonds yielding more than longer-dated bonds. This anomaly may begin to shift and move back into a more traditional acceding curve in May should the Fed stop raising rates. That may be the time for RMR’s Investment Committee to extend durations on our fixed-income portfolio, locking in higher long-term yields before rates decline.

With the traditional 60/40 investment portfolio, 60% stock, 40% bonds, having the worst year in decades, there are reasonable alternative investments that can provide both income and growth that are not tied to either the stock or bond market. Many of you already own alternative products in your portfolio, and you can see in 2022 how these investments, for the most part, helped in mitigating the losses in both stocks and bonds. The RMR Investment Committee will continue to research additional alternative products to be added to your portfolios in 2023.

We at RMR want to take this time to wish all of you a healthy and happy New Year.