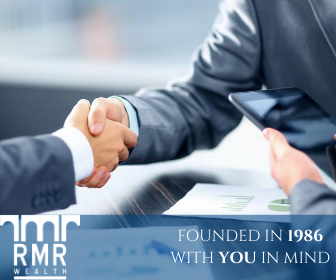 The Trepp CMBS delinquency rate registered its largest decline since January 2016, indicating that many commercial tenants who were late on their mortgage payments have caught up and are starting to show signs of recovering.

Borrowers of commercial mortgages including hotels, retail centers and office and residential complexes had been falling behind on their loan payments as coronavirus related shutdowns and restrictions have ravaged their businesses with the commercial mortgage-backed securities delinquency rate peaking in June at over 10%. A commercial mortgage-backed security (CMBS) is a fixed income security that is backed by mortgages on commercial properties rather than residential real estate. As they are comprised of loans issued to commercial real estate property owners, they may serve as a strong proxy for the health of the commercial real estate market. The current percentage of CMBS loans that are more than 30 days delinquent is 9.6%, with the majority of those delinquencies concentrated within the lodging and retail sectors. Despite the recent positive development, the number of loans that are more than 90 days delinquent has increased almost ten-fold from .29% in June to 2.65% in July. The dichotomy between companies being one month behind on rent versus companies being three or more months behind on rent may serve as a testament to how crucial it has been to be able to safely lift pandemic related shutdown restrictions in getting back to some semblance of business prior to falling too far behind in mortgage payments.1 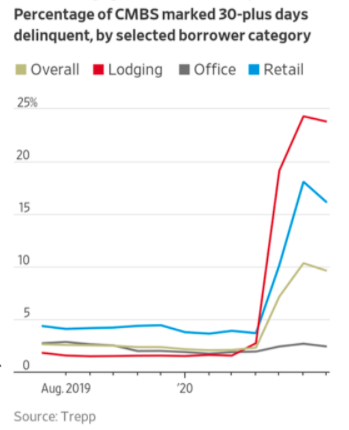 The lodging and retail sectors represent 23.79% and 16.10% respectively of total delinquencies. Lodging delinquencies are up over 1587% pre-covid while retail delinquencies are up over 325% pre-covid, accurately representative of two of the hardest hit areas of the national economy that are furthest removed from full recovery.2 Most debt relief requests that have been generated have originated from these two sectors. Hotels are operating at significantly reduced capacities as business and vacation travel are still greatly diminished and largely non-existent for many companies and families. Many hotels, such as those that operate primarily as conference centers, remain closed. Hotels in troubled cities such as NYC and Los Angeles are close to empty, while hotels in popular vacation and resort locations such as Las Vegas and Orlando have laid off large numbers of workers and are nowhere near capacity, let alone break-even occupancy levels. In stark contrast, delinquencies have remained low in industrial and office centers as well as large multifamily housing developments despite temporary shutdowns and a spike in unemployment that have the ability to detrimentally effect such areas. As certain areas of the economy have been devastated by the widespread and continued effects of COVID, others have benefited from shifts in behavior and consumption patterns while still others have been propped up and supported for the time being by large amounts of fiscal and monetary stimulus.

While it’s encouraging to see more and more businesses getting back on track and staying current with their lenders, there is a long way to go before the country gets back to the pre-covid levels exemplary of a thriving economy. Given the high level of continued shutdown related restrictions in many areas, along with suppressed levels of demand and elevated levels of fear and uncertainty, expect for many commercial property owners in the industries that are most impacted by such factors to experience irregular and variable levels of recovery, with many speed bumps and road blocks along the way.